The tide of default is coming! Chinese shipyards are looking for "amulets" to fight the epidemic

Affected by the new coronavirus epidemic, a large number of ship desulfurization equipment conversion projects at Chinese shipyards may face delayed delivery. In addition to doing its best to restore production, the "force majeure" of the epidemic situation may become a "talisman" for Chinese shipyards facing the risk of default.

According to Reuters, an executive of Merchant Shipping Mitsui said that many ships are currently queuing up to install desulfurization equipment in Chinese ship repair yards to meet the latest sulfur limit order requirements. However, as Chinese provinces require companies to extend the Spring Festival holiday to February On the 9th, the shipyard may not have enough workers to complete the installation work.

Merchant Marine Mitsui CFO Maruyama said: "Many ships are moored in China's shipyards to install desulfurization equipment, but the industry is worried that workers may not return to the shipyards soon." However, he also said that these waiting ships Excludes ships from merchant shipping Mitsui. Maruyama Taku believes that eventually this may reduce the number of ships available on the market and gradually tighten market capacity.

Clarkson also believes that Hubei workers in shipyards account for a relatively high proportion, and the epidemic situation affects the installation of desulfurization equipment, and shipowners will also face more delays in installation, further exacerbating the extension of installation time. Ships entering the factory in the future may also face the risk of being cancelled.

Data show that as of the end of 2019, the number of ships in the global fleet (more than 2,000 dwt) that have been or will be installed with exhaust gas scrubbers has reached 3111 (including 500 new installations, 1,626 conversions, and 985 conversions). Alphaliner data shows that in 2019, the average docking time for ships to install desulfurization equipment is 59 days, of which 17% of ships have completed retrofits for more than 80 days.

Research institute IHS Markit believes that the conversion of desulfurization equipment and the dismantling of old ships will lead to a tightening of market capacity, help to increase the freight rate of each ship type, and ultimately promote an increase in orders.

Nonetheless, for shipping companies, ship shutdowns caused by delays in the installation of desulfurization equipment will still cause huge losses. According to previous estimates by Alphaliner, the shutdown of large container ships will bring huge losses to shipping companies of up to $ 50,000 per day.

May face a wave of defaults, force majeure becomes a "talisman" for Chinese shipyards

At the same time, due to the delayed delivery of ship modifications, Chinese shipyards may face a wave of defaults in the future.

It is reported that several local trade promotion agencies of the China Council for the Promotion of International Trade have recently announced that if the pneumonia epidemic caused by the new type of coronavirus has prevented them from fulfilling the international trade contract as scheduled or cannot, the enterprise may apply to the local Council for the Promotion of Force Majeure Sex proof. Force majeure factual proof is a factual proof act in the field of commercial proof, which refers to the application by the CCPIT and its authorized branches and branches to prove the facts related to force majeure. Relieves of non-performance, incomplete performance and delayed performance of the contract. 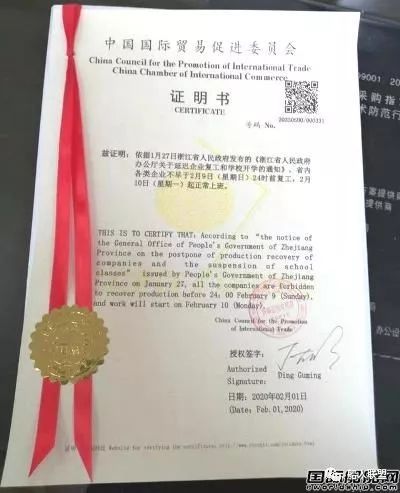 Picture: On the morning of February 2nd, the China Council for the Promotion of International Trade issued the country's first force majeure factual certificate of a new type of coronavirus pneumonia to an auto parts manufacturing company in Huzhou, Zhejiang.

In addition, considering the risk of breach of contract due to delayed delivery due to failure to resume work in time, some people in the legal profession have suggested that the new coronavirus epidemic situation is likely to constitute "force majeure", and the delay caused by this can be extended accordingly Under the circumstances, the shipyard as the seller should still pay special attention to several issues and take countermeasures:

The first is to confirm whether the delay is a "permissible delay" agreed in the contract;

The second is to inform the shipowner in a timely manner. Failure to issue a notice of compliance with the requirements within the time agreed in the contract will likely result in the loss of the right to delay delivery.

Picture: China Shipbuilding Chengxi Wharf docked nearly 20 ships under repair, setting a new high for berthing for nearly ten years. Among them, there are 11 major repair projects such as desulfurization modification ships and multi-type ballast water modification ships. Since the Spring Festival, China Shipbuilding Chengxi has completed 10 ships leaving the factory to ensure that orders are delivered as scheduled.

Zhang Yongjian, a professor at Dalian Maritime University and a senior arbitrator of the China Maritime Arbitration Commission, said that during special periods, a series of emergency measures will have a continuous impact on normal economic activities. In this context, the normal performance of some shipbuilding contracts in a short period of time may be affected to varying degrees. After the epidemic situation is stable, shipping companies will face a series of legal issues. Whether the epidemic situation can be exempted from liability by reason of "force majeure" or it will become one of the key issues to resolve contract disputes. Zhang Yongjian believes that from a legal perspective, shipping companies can consider assessing the impact of the epidemic on the contract from two aspects: force majeure and changing circumstances. The main difference is that the result of the change of situation is obviously unfair to one party or the inability to achieve the purpose of the contract, that is, although it can be performed but continued performance will result in unfairness, so the two parties to the contract should share the corresponding risks; The contract cannot be performed, and there is no liability for failure to perform the contract based on this.

Zhang Yongjian said that due to the impact of the epidemic, the shipping company as a performing party cannot be completely passive, and it should take active remedial measures to reduce losses. After the situation returns to normal, once the shipping companies have the normal start conditions, they must perform the contract in a timely manner to ensure the effective implementation of the contract.